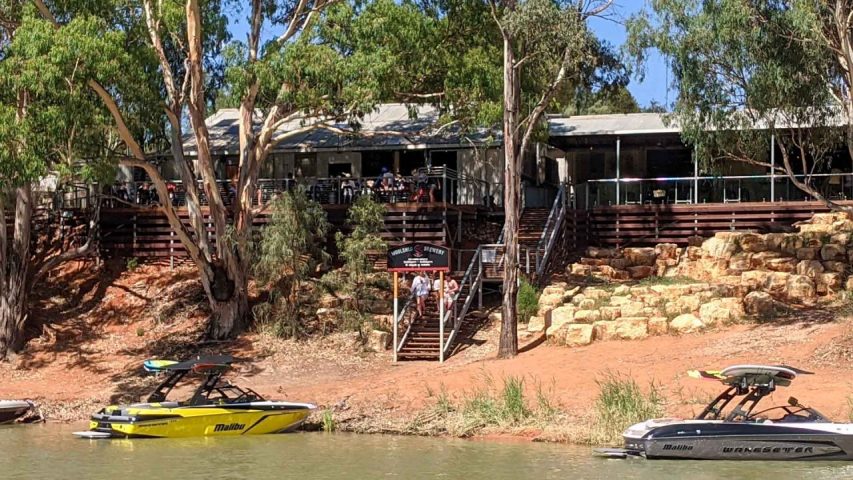 Woolshed Brewery at Wilkadene Station is absolutely a hot ticket. Situated in the sunny locale of Murtho, 20 kilometres north of Renmark, this shady property is perched high on the tall banks of a beautiful backwater of the Murray River. They brew an amazing range of beers and make some seriously drinkable hard lemonades. So good in fact, that people drive out to the middle-of-nowhere or pull up in their boats along the riverbank. It’s around 20 minutes by car from Renmark – or you can moor your boat right below the deck.

The Woolshed Brewery has been brewing for more than ten years and have grown from local hotspot to tourism sensation. The grounds of the brewery are set among the 100 year-old woolsheds. Tall trees shade the original sheds and the wide deck and lawn area. Check out the art and history packed sheds and spend some time browsing around to learn more about Wilkadene Station life.

We arrived around 4 pm on a houseboat from River Murray Houseboats. The brewery closes at 5 but the place was still pumping. Jugs of Rude Ruby (a hard grapefuit and wine based drink) are obviously super popular with the locals. It’s interesting to watch the crowd as they reluctantly disperse. Half of them head off on the road, the other half jump into their boats on the river.

We ordered two paddles of four schooners each. First up, the beer paddle took us from the lighter River Time Ale through to the strong Firehouse Coffee Stout. Next up we tried the cider followed up by Utopia Hard Lemonade and Rude Ruby. There’s plenty of beers on tap and you can’t beat the freshness of a tap-poured beer or cider.

A few words of advice to help you plan your visit. If you’re arriving by river, there’s only so much mooring space. I’m not sure what we would have done if it had been too busy because parking a houseboat isn’t like parking a car. They don’t have a kitchen at the brewery but you can ‘build your own’ platter selection and they host local food trucks on weekends.

They’re open Wednesday to Sunday from 11 am to 5 pm.

Don’t forget to grab some brews to take away in stubbies or cans. Soft drinks are also available.