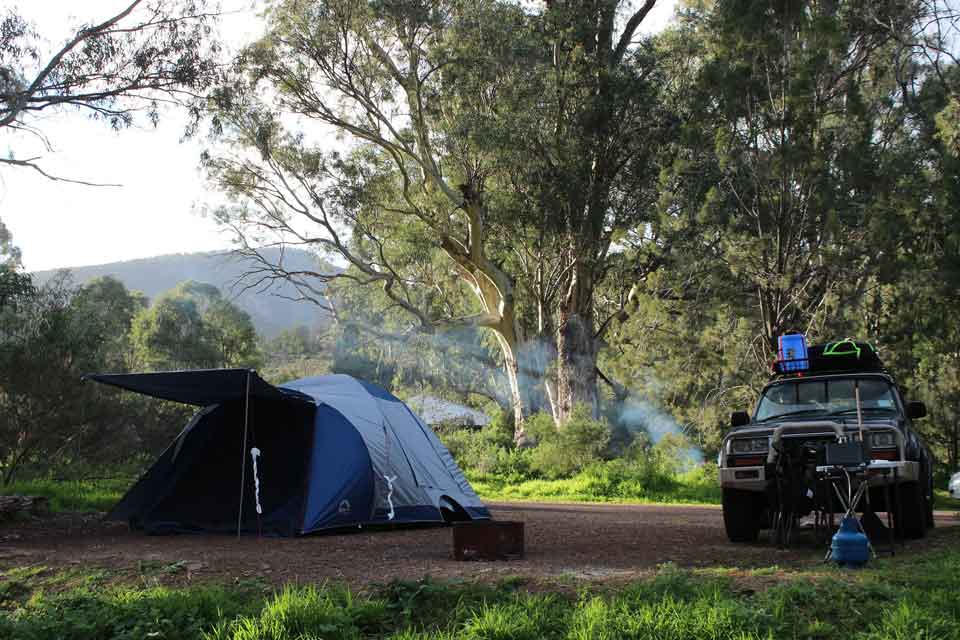 ‘Booking’ your camp site and paying entry fees for national parks used to mean being first to arrive and pay at the money boxes or the park office. It was first in, first served. The online camp site booking and payment system in South Australia was introduced as a trial in 2013 and now applies to all South Australian national parks. Some people reckon it’s great but not all of the camping community see it that way. Legendary Australian travel writers Ron and Viv Moon say it’s still a “Bloody pain!” The Environment Department seems pleased with the way the system is going, even as it overcomes teething troubles.

The idea that you have to book your national park camp sites in advance still isn’t widely appreciated, despite generating plenty of debate amongst hardcore campers. In a recent discussion hosted on Free and Low-Cost Camping in South Australia on Facebook, many respondents complained about the old ways where selfish campers would stake their claim up to a week before major holidays. Now under the new system it appears there is still a problem with some people just camping in sites with no regard for the new booking system and refusing to move for those who have booked online. Campers have issues with flexibility too, particularly when there is no mobile coverage, or when they encounter other issues getting from place to place. Ron and Viv Moon were particularly concerned that if they’d like to book an extra night in a place they like, they “have to do it online,” and that mobile coverage “remains an issue right across Australia.” Ron said that while in the Little Desert National Park in Western Victoria they decided they’d camp for the night but the “trouble was while there were a couple of signs telling us how to do it, there was absolutely no mobile phone reception.”

How to book online

To book a national park camp site in South Australia, visit www.environment.sa.gov.au/parks/booking. You can browse the parks and their sites and see maps and photos. You need to use your credit card to pay for a permit online and a digital copy of your pass is sent to your computer, tablet, or smartphone to keep. You don’t even need to display anything on your car but just in case, keep the email pass on your device. A spokesperson for the Department of Environment, Water and Natural Resources said that visitors can also book and pay for “accommodation, tours, dive permits, and facilities hire, such as tennis courts and picnic grounds online.”

What if I don’t want to book online?

You can buy passes in person at agents located near to national parks. One of the agents nearby to Deep Creek Conservation Park said that they didn’t handle many bookings. The department spokesperson agreed and said “bookings processed by our regional booking agents account for less than ten percent of the total bookings made.”

How is it policed?

The department said there are checks and balances in place to overcome early criticism. The system is designed to ensure that camp sites are not overbooked, and refunds are available in circumstances where the parks are closed, or reasonable notice is given of cancellation. The department spokesperson said “Rangers run reports and undertake on-ground patrols,” and that, “administrators check for anomalies and bogus bookings.” Ron countered that most rangers wouldn’t want to be quoted and have many issues with the system but have been told “That’s the way it is so make it work.”

How is the money spent?

The department spokesperson said that around 1.2 million dollars has been raised and is expected to increase over time, allowing the department to “support a range of park management and conservation initiatives across the state.”

What are the benefits?

The spokesperson said “there are no longer high volumes of vehicles going around campgrounds…and, there are no longer high volumes of people being turned away because they missed out on a site,” adding that, “people would drive around and around in the hope of securing the last site. This caused safety concerns and heavy resourcing requirements to manage.” Several avid campers on Facebook agreed, saying that they didn’t feel like they had to “rush to beat the crowd to the popular spots.”

There are plans to expand the system further to include fees paid by commercial tour operators and add new campgrounds close to Adelaide. A new campground opened recently Onkaparinga Gorge National Park, and has both online and offline booking options available. A new campground is also salted for opening in autumn 2018 in Para Wirra Conservation Park. To promote the new system the department spokesperson said they use a “combination of word-of-mouth, social media, radio advertising and articles in popular travel magazines to help promote the system,” and  “further advertising is being planned.”

Plenty of other places to go camping too!

There’s still lots of places you can camp, and plenty of camping apps for smartphones that will guide you. WikiCamps is one of them (you can have a free trial but it will cost you to keep it). Outside of national parks there are still plenty of places you can set up camp for free (or low cost) without a booking. They’re well kept secrets and they’re often remote. It pays to ask questions at local businesses about places to camp nearby when you’re travelling. Parachilna Gorge in the Flinders Ranges is still free to camp (except in summer) and there are sites along the River Murray where you can camp for free.

Change takes time and hopefully readers of this article wouldn’t want to get “caught out” doing the wrong thing when they’re not meaning to. The online booking system will provide surety for campers and help fund our national parks to be the best places to camp in the country.

Links to the booking sites for all around Australia are here.