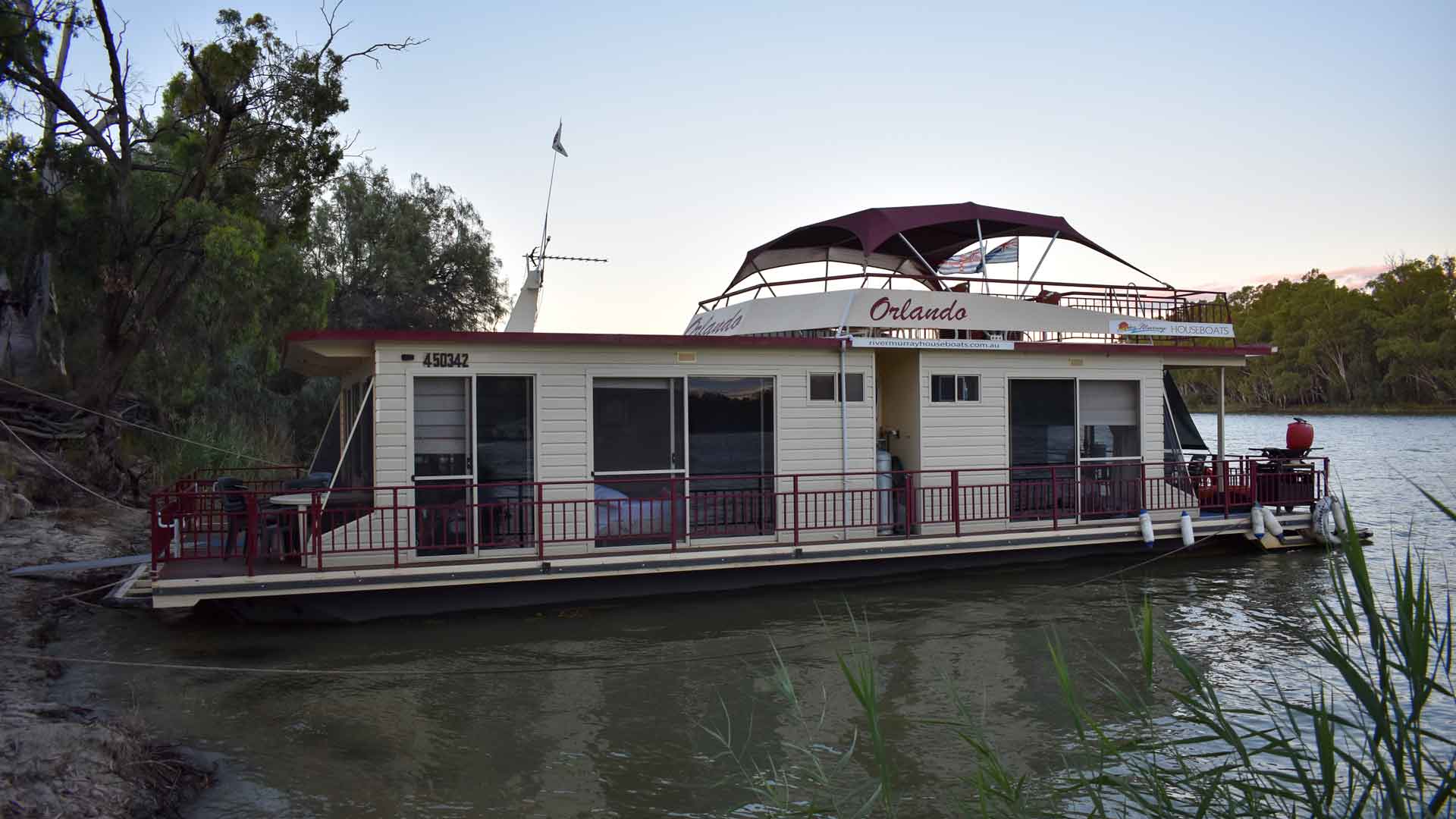 Are you looking for a different kind of holiday? How about a holiday with plenty of adventure AND comfort? Houseboat holidays bundle all the comforts of home onto a big boat in the wilderness. The best thing is, you can explore at your own pace. You can find your own perfect spot and stay there, or choose a different place to moor the boat every night, it’s up to you.

We hired a houseboat from River Murray Houseboats near Renmark to travel upstream to Chowilla Creek (and back) on a seven-night holiday in January 2021.

Read on for a day by day description of how it unfolded. There’s an embedded map at the end – showing you the mooring spots and the coveted beaches.

Day 1 – Boarding at Paringa to Renmark

Paringa is a small town just across the Murray River from Renmark in South Australia. The River Murray Houseboats base is nearby, between Lock 5 and the Paringa lifting bridge.

We arrived at 1 pm to load all our stuff onto the boat and park the car. We parked right in front of the boat and met the RMH team. Everything was spotless and ready to go. We had everything loaded from the car to the boat in fifteen minutes or so.

After parking the car in the lockup one of the team took us for a quick guided cruise out onto the river. Surprisingly, it didn’t take long to get used to driving the boat. Before long we were floating away on our own, waiting for the Paringa Bridge to lift it’s almost one-hundred year old span to allow us underneath. The bridge always opens on time. So we opened up the throttle and powered our way under the bridge at the head of a queue of houseboats headed upriver.

The short river trip to Renmark should be enough to get familiar with the mad school-holiday river traffic. Houseboats, fisherfolk, ski boats and jet skis all maneuver around each other while their wakes cause havoc.

The wharf at Renmark is designed to attract houseboats to the town and is an excellent jumping off point for any river journey. Shops, pubs, clubs, and takeaways are all available just across the road from the wharf. Look out for the friendly possums that live in the tall palm trees along the wharf. The cute little critters are so friendly that you can hand feed them. The ‘Possum Parade’ has become a Renmark tourist attraction in it’s own right.

After stocking up on supplies from the local supermarket and butcher, we left Renmark at about 9.30 am to head upriver. Once we were away from Renmark the boat traffic lessened considerably and we settled into cruising speed (about 6-7 kilometres an hour).

There’s a lot of novelties to enjoy on a houseboat holiday. The kids enjoyed the novelty of making a hot lunch on a moving boat while us adults took turns driving. It was refreshing to see everyone leaving their devices alone, instead preferring to sit and talk and watch the scenery. I think that’s what the locals mean about switching to ‘river time’.

One of the highlights along this stretch is Headings Cliff. It’s one of those iconic places where red cliffs, worn with time, tower over you as you pass by. There’s a lookout atop the cliffs which is easily accessible by road from Renmark. Inside the tight riverbend across from the cliffs is a river beach. These beaches are popular mooring sites and are almost always taken.

After cruising around a few more tight bends we came across the entrance to a large by-water. It’s here that Wilkadene Station and the Woolshed Brewery offer moorings for all kinds of boats. We cruised in, passing Murtho Rock (a rare rock formation) as we entered. We moored at Wilkadene for some quick repairs but were quickly underway again.

After spending some time checking out a few spots we settled on tying up right next to the entrance to Amazon Creek.

Amazon Creek is one of those tiny rivulets that snake their way around the vast floodplains. It’s popular with extreme dinghy racers who compete in annual tournaments. Little boats raced in and out of the tight and twisty little creek near sunset and sunrise.

It was a much shorter day of driving the boat today. We cruised at low speed and enjoyed the beautiful river scenes unfolding as we went past Chowilla Homestad and Chowilla Woolshed. Not much further upstream we found the mouth of Chowilla Creek. After some deliberaton, we decided to head further upriver to see if we could find one of those beachy kind of spots to moor for the night. In a now recurring theme, they were already occupied. We turned and headed back downriver to explore Chowilla Creek.

Just around the first bend in the creek we were stopped by the Chowilla Regulator. It’s a large concrete weir with removable gates designed to manage river flows. Small boats may pass through when it’s open but houseboats cannot.

We moored within view of the regulator. It’s an excellent place. It’s quiet, and free of almost all motorised river traffic. You can experience the true tranquility of the country and enjoy an outback river vista not found along the main river channel.

We probably should have stayed put, but we wanted to find a spot out of the prevailing south-westerly wind. We found a well established mooring just downstream, only half an hour from our starting point. It was here that we decided to spend the next two nights. The only problem was one or two obnoxious speedboat drivers. They chose to pass within metres of the back of houseboat, rather than keep a lawful distance. By now, we were real houseboaties. Jetskis and speedboats were becoming a real annoyance.

Want to create an instant idiot? Just sit them behind the wheel of an expensive wakeboat and let them rip. Sometimes their attitude to fellow river users is careless and annoying.

Today was a no-driving day. We explored the shore around the mooring site a bit, we read books, we swam in the river, and I fished. I flew my drone to capture some amazing aerial footage of the river around us. You can see some of that footage in this video.

It’s days like these that ‘river time’ prevails and relaxation takes over. You might even get bored of fishing. Carp are easy to catch but you can’t throw them back. Disposing of them does become messy and boring after a while.

It was time to begin the trip back to Renmark. Casting off at around 11 am, our afternoon destination was the Woolshed Brewery at Wilkadene Station. This beautiful outback brewery makes legendary beers and hard lemonades. It’s a unique experience – pulling up at a country pub in a houseboat. After an hour or so enjoying their wares and the party-like atmosphere, we untied the boat and puttered off downriver to find a spot for the night.

Heading Cliffs is a popular spot for houseboaties to stop for the night as they make their way back to their bases somewhere around Renmark. The riverbank opposite the cliffs is gentle with plenty of space. There’s even a river beach… but of course it was occupied. It’s the kind of spot where you might like to have a campfire on shore in the cooler, non-fireban, months.

It’s worth mentioning that due to the cliffs there’s no mobile phone coverage here.

The sandy red cliffs along the Murray River are spectacular to watch at sunrise and sunset. The sun lights them up with a rusty glow – dominating the scenery for miles around.

The four and a half hour trip back to Renmark was uneventful. The family made the most of having the internet again. By now, the girls were totally used to the boat and spent most of their time reading books or playing phone games. I was soaking in as much of the wilderness view as I could before houses began appearing along the river banks and we found ourselves back in Renmark.

Back at Renmark, the river is a chaotic and bumpy wash of jetskis and ski-boats. The never ending wake wash makes mooring the boat quite difficult. After five nights of a calm river, we hadn’t missed the contant sloshing and bobbing around. Life upriver is so much more peaceful.

We’d nearly run out of supplies and were happy to be back to civilisation. V headed off to get fish and chips for the kids dinner straight away. Once they were fed, we left them on the boat to go out for dinner at ABS Smokehouse Pizza Cafe. There’s a few places you can go out for dinner within sight of the wharf, like the Renmark Hotel and Renmark Club.

It was time for us to change our clocks back to real world time. The Paringa bridge opens at 9.30 am and 2.30 pm sharp to allow river traffic to pass under it. It’s quite a sight to be in a long queue of houseboats waiting to go under the bridge. All amateurs – and all trying to hold their boats in position among the small boats darting around and in-between.

After seven days on the river we were ready to head home, but we’d do it all again anytime.

Driving a houseboat is easy.

There are no shops once you leave Renmark.

For a calmer experience, try not to moor on the windward side of the river.

Don’t stress if you’re having trouble mooring. Back the boat out early and try again.

The river level may rise and fall while you are moored and it might feel like you are stuck on the bank. If this happens, the instructions at the helm will help.

That’s it! Murray River Houseboat operators really do bend over backwards to make it an easy experience, even for first timers!

Why don’t you check out River Murray Houseboats and go on an adventure?

Ready to explore more? Get the latest from Outdoorstype here.