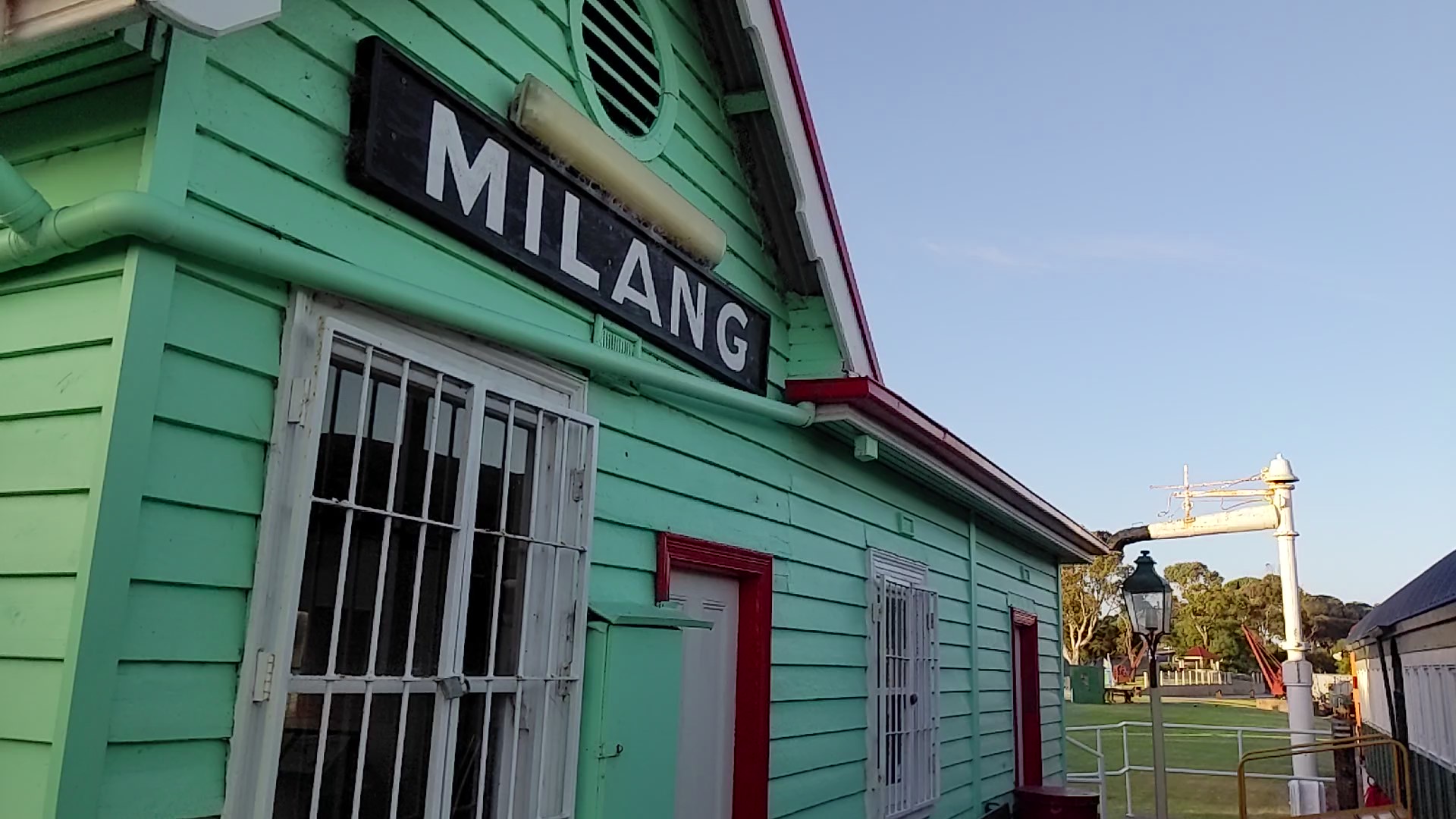 In this article I’m going to take you on a walk through the Milang Railway Museum and the South Australian Light Railway Centre.

Milang Railway Station opened in 1884 as the terminus of a branch line from the Victor Harbor Line. It thrived for a while but the river trade was in decline by the time the line was completed. Rail services dwindled until the station closed in 1970 and virtually all traces of the station were removed.  A committed band of volunteers stuck by the idea of restoring the precinct one day as a railway museum and they rebuilt it all, bit by bit, until the new Railway Museum officially opened in 1992.

The museum re-established a vibrant railway precinct on the main foreshore area of Milang and the little lines of the South Australian Light Railway Centre are extending it even further. Static displays, restored engines and carriages with a cafeteria, memorabilia and craft are all centred on a beautifully restored station platform area.

Hop into the driver’s seat of engine 351 to experience what it’s like to drive a train.

Go inside and explore the old station building. Left to rot in a farm paddock, the museum volunteers dragged the old building back to its former location and restored it to the faithful reproduction it is today. There’s heaps of displays and memorabilia in the old parcels room and stationmasters office and you can head into the ticket office and check out a static model railway display among heaps of other interesting bits and pieces.

The restored former explosives van houses the story of the original railway and the museum. There’s a wealth of information in here and plenty of other bits of South Australia railway history to see in here.

The guard’s van is an interesting step back to the railways of the late twentieth century. You can get an impression of the life of a train guard. It sure seems austere compared to what we expect these days. Cross the platform and stick your head into the accident van to see a collection of old railway tools and assorted hardware.

The cafeteria cars are open on Sundays and event days. The restored passenger cars are fitted with dining car fixtures and offer a reasonably priced menu of meals and refreshments. It’s nothing flash but it’s good value. I wonder if they should offer the dishes shown on the sample of the old SAR menu.

Bookshops like the little one in a carriage here are always worth a look for rare finds. The craft shop occupies the entire length of a carriage and holds a trove of local gifts and crafts. It’s open 12 – 4 on weekends.

The South Australian Light railway Centre tells the story of the nearly 700 light railways once at work around SA. Like the Cobdogla steam railway, which you can also have a go at driving. Other restored light locomotives and rail equipment are maintained in running condition in the shed. A pushbutton operated model railway provides some interactive fun for kids. Once again, the walls offer detailed information on light railways and the displays.

The Milang Flyer departs from Milang West platform every Sunday between 12 and 4 pm with free train rides. A little battery operated locomotive hauls wagons once used to move explosives at Smithfield. This little train jauntily trundles its way along the track to the western end of the Museum precinct where you can get a look at the old railway turntable location, albeit the turntable is not the original.

Across the road on Stirling Street, there’s a plaque and railway gate marking the beginning of the Nurragi walking trail to Sandergrove.

The old Fowler engine from Mackay looks amazing against the backdrop of the lake, especially at sunset. There’s still more to see if we double back to the eastern end of the station area.

The foreshore precinct has a walking trail taking you along the route of the old horse-drawn tramway to the jetty. Walk out to the old goods crane and see the boats pulled up to the jetty and read more of the history of the area.  Still more rolling stock and displays are parked all around the area. For me, Engine 351, built in 1949, is the most imposing part of the display. I think it’s what gives the whole precinct the air of being a working station.

The museum is open on weekends from 12 – 4 and the café car is open on Sundays. There’s plenty more to find around the museum and you need to come see it for yourself. Bring the family, it’s free to look around. Donations are welcome and encouraged.