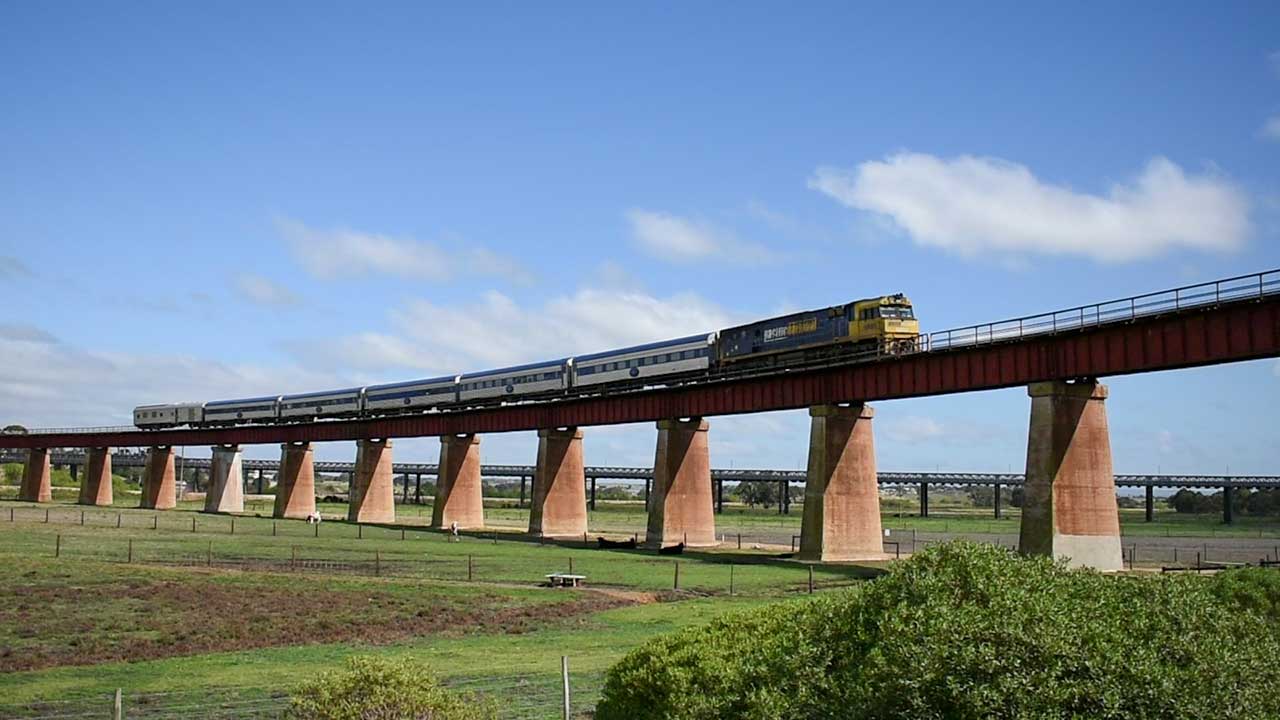 The Overland is a passenger train service between Adelaide and Melbourne that began in 1887 and looks set to close forever if it isn’t rescued with government funding.

The train runs as a twice-weekly daylight service between Adelaide and Melbourne and carries about 17,000 passengers per year. It departs Adelaide on Mondays and Fridays and returns to Adelaide on Tuesdays and Saturdays. A one-way trip takes around 10.5 hours compared to a 1.5 hour flight between the cities airports.

The train stops in Murray Bridge and Bordertown in South Australia, and Nhill, Dimboola, Horsham, Stawell, Ararat and Geelong in Victoria.

The journey begins at Adelaide Parklands Terminal and terminates at Southern Cross Station in the heart of Melbourne. The train travels via the Main South Line before joining the Western Line in Victoria to take it to Melbourne via Geelong.

The Overland began as an overnight sleeper service and was a popular and modern method of travelling between the two cities. At various times it offered a motor-rail service where people could bring their cars along until the loading facility in Melbourne was removed.

Service frequency reductions began in 1998 until in 2008 the service was converted into a day train without sleeper carriages. Services have become less frequent since then, from three times weekly to twice weekly.

Our journey on The Overland

Adelaide Parklands Terminal isn’t in the centre of the city and isn’t easily accessible by public transport. It was just the first of a baffling series of occurrences and situations that didn’t make life any easier for The Overland.

Despite the fine print about checking in there was no need to be at the station any more than an hour (at worst) before boarding. Especially if you were only carrying light luggage. The first boarding call was only made twenty minutes before departure.

Boarding was easy as we were assigned seats at check-in. We found our carriage (they’re lettered A,B,C etc) and flashed our id at the steward/host. There was no choice of seating. It was allocated at check in without any explanation; which was one of the other baffling things about the service compared to other train journeys.

Once you’re on board, you’re locked in for ten and half hours. There’s no stepping out of that train unless it’s your stop.

One of the stewards introduced us to the train and its journey much as they do on planes. Except this briefing wasn’t about life jackets or seat belts; it was all very stern sounding about not doing this in the toilets and doing that with the doors. We felt a bit scolded because some idiots flushed towels down the toilets. No biggie though. We moved on quickly.

The carriages are a bit dated but were spotlessly clean and, oh so spacious! The seats are huge. There’s more legroom than anyone needs and the windows are massive with excellent views. The seats even turn around so you can face your travelling party if it works out that way and they tilt right back for sleeping. There’s plenty of overhead space for hand luggage. The premium carriages have a 2+1 across seating arrangement, compared to the regular carriages 2+2 layout.

How smooth was the ride?

The train pulled away from the station so smoothly that no one noticed any bumps and it was quiet! You could just hear the engine horn blasting away at the front of the train and there was a little bit of rattling but it was a very smooth ride. You can leave things lying around on the windowsill or your seat and they’ll stay there. We did this with our phones when mobile coverage got patchy in some of the remote stretches.

How much did it cost?

Our journey cost $159 one-way, per person at the time for premium in-seat service which included breakfast and lunch, along with tea, coffee, soft-drink and a snack.

The stewards took our meal orders before the train had reached Belair and we settled in. The breakfast options were served an hour later. They were good but they were a bit slow. We were getting a bit ‘hangry’ (always have a snack before you get on the train).

The train crept its way up over the Adelaide Hills and even stopped twice to pass other trains. It’s the most picturesque part of the line so it wasn’t too bad. It took two hours to reach the first stop at Murray Bridge before crossing the Murray River.

The country-side for the rest of the journey traverses wheat-belt country and is 99.9% cropping land and flat scrub. It’s pleasing to the eye but it all kinda looks the same after a while.

You can get up at anytime and wander between your carriage and the café car. The aisles are huge and there are huge bathrooms and spaces to stand at one end of each carriage.

You could see the Grampians off in the distance near Stawell but by that time you’re probably well into a book or a few wines in the café car.

The only charging points for devices were in the café car, which was another one of those ‘death by a thousand little cuts’ things. Not having Wi-Fi on the train (it’s 2019 right?) meant that our phones were working hard streaming music and video. Low coverage also meant heavier battery drain and it was a bit of a struggle to keep our phones charged the whole way through. Modern life hey?

The café car was comfortable enough and it was a quick way to get drinks and snacks. Regular service customers could also purchase the same meals as premium customers in the café and there was a wider range of drinks and snacks available than on the premium menu.

Travelling during non-daylight saving meant that we arrived in Melbourne after dark, so we couldn’t see much. What we did see was industrial land, rail yards and people’s backyards as the train progressed ever more slowly toward the platform at Southern Cross Station (formerly Spencer Street Station).

We were ready to get off as soon as the doors opened. We’d enjoyed the trip immensely, but we wanted off the train… now. Those who’d brought bulky or heavy luggage all trotted off to the luggage car to retrieve it while we just headed up an escalator to the concourse and were instantly in the heart of Melbourne.

There’s plenty of transport and accommodation options within walking distance from the station so it’s easy to continue your journey from Southern Cross Station.

We enjoyed the trip on The Overland passenger train but it’s not something I’d do again. At this stage it appears that it’s not something that I will ever be able to do again anyway. Flying is cheaper and quicker and the service is closing. Add that to the weird little things I described above and The Overland appears to be an anachronism whose time would have been up long ago if it wasn’t for government subsidies.

Great Southern Rail recently re-branded themselves as Journey Beyond and at this stage there is no indication that the service will run beyond the end of 2019. (Update: the service has been extended until March 31st 2020) The South Australian state government has withdrawn its subsidies for The Overland. I did overhear a staff member expressing optimism that the service would be reprieved at the last minute.

With the removal of both federal and state government subsidies and plummeting patronage, the service appears to have become unsustainable.