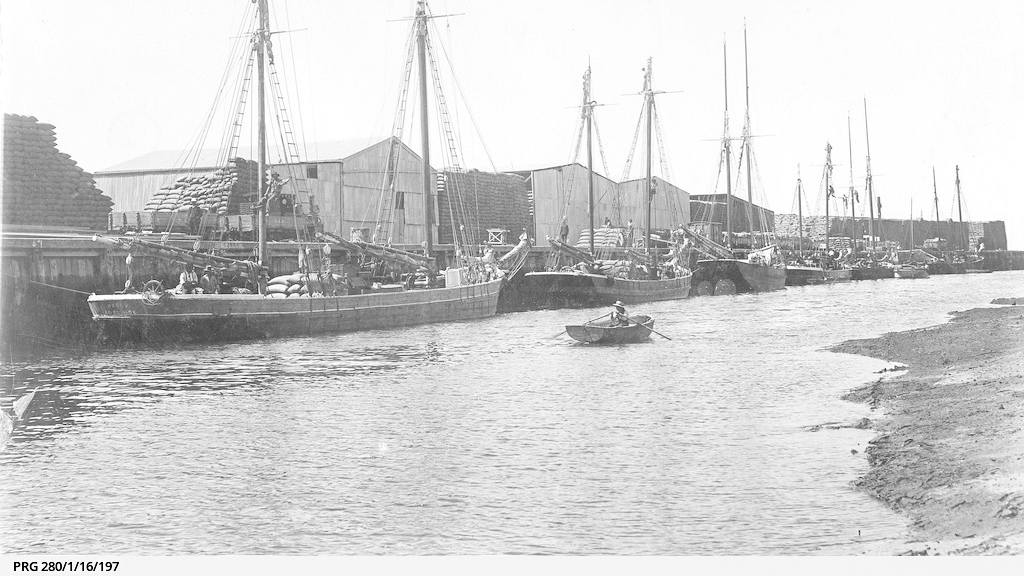 We’re going to explore the Hoyleton to Port Wakefield railway line. This section of railway line is significant because the bit we’re looking at eventually became part of two important South Australian railway lines. There’s a lot that’s confusing about the web of mid-north railway lines – hopefully this post helps explain them a little bit.

Originally opened as a horse drawn and gravity operated tramway from Hoyleton through Balaklava to Port Wakefield in 1871, the narrow gauge line was soon upgraded to steam engines in 1876 and extended to Blyth.

The Balaklava to Moonta line was formed when the railway from Port Wakefield reached Kadina in 1878 and joined up with the horse-drawn tramway built between the port of Wallaroo and Kadina.

The Balaklava to Blyth section eventually became part of the Hamley Bridge to Gladstone line when that line reached Gladstone in 1894. This meant that trains on that line had to reverse direction at the east-west Balaklava Station (awkward much?).

All lines in the area (then known as the ‘Western System’ were converted from narrow to broad gauge in 1927.

The Port Wakefield line crosses what was originally the 1925 Adelaide to Redhill line at Bowmans. Passengers changed trains at Bowmans for connecting services between Moonta and Redhill and later Moonta and Port Pirie. The Port Pirie line was progressively upgraded to become the standard gauge Adelaide to Port Augusta line we have today.

The section from Balaklava to Paskeville closed on 4 April 1984. The section of track between Balaklava and Gladstone was removed in late 1989.

What is remaining at each location?

PORT WAKEFIELD was the third busiest port in South Australia after Port Adelaide and Port Augusta in the 1880s. It was a busy place – connected by rail to Moonta and Adelaide.  The original station was closer to the refreshment rooms and a second station was built at some stage. I’m not clear on this bit but the second station burned down to be replaced by a wooden building in 1927. The original refreshment rooms, workers cottages, goods crane, and the dilapidated and fenced off “new” station are all that remains here.

BOWMANS is now a ghost town. All that remains is a long platform remnant, a large water tower, and a railway phone box.

The Balco Intermodal Facility and Viterra grain silos at Bowmans are huge facilities – which means more freight is consigned from here than ever before. There’s a big solar farm in between the freight terminal and the old town – but the townsfolk are long gone.

I looked but there’s no evidence of the northern triangle on the old line seen on some Google Earth files.

BALAKLAVA – The rails are still in place from just before you reach the town until just east of the Hamley Bridge junction. That line saw it’s last train in 2004, so there’s still plenty to see in Balaklava. 3 or 4 tracks still run through the yard and the turntable, ground level station building, goods shed, crane, and disused silos remain.

WAKEFIELD RIVER BRIDGE – This is nearby to the heritage listed Dunn’s Bridge. Only the concrete supports remain.

HALBURY – Nothing to see here except the bike trail signage.

HOYLETON – S. Sanders (Builder) carved and laid a name and date stone into the Northern façade.

Railway shed and storeroom and some remains of a small platform. If you look closely you’ll find the builders name (S. Sanders) and the date it was completed (1870) carved carefully into sandstone above the door on the northern façade of the shed.

BLYTH – Very little evidence remains. The old station building and goods shed have fallen into disrepair and are situated within a grain handling facility.

I hope I’ve been able to unpick the complicated web of railway lines in the near mid-north of SA. I know I found it hard to keep track of.

There are so many more old railway lines to explore throughout the mid-north and all across SA. Stick with Outdoorstype to explore and explain them all.