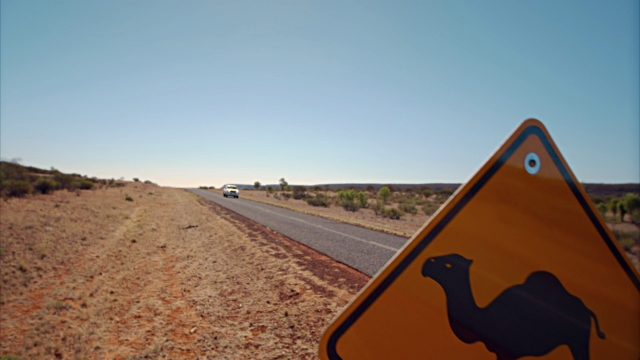 Australia is home to the world’s largest wild population of camels., Most of them are the Dromedary Camel (one hump) imported from Africa and Arabia and some are Bactrian Camels (two humps) from Asia. They were brought to Australia by early explorers to help with the exploration and settlement of central and western Australia until motorised transport took over in the 1930’s. It was then that many cameleers simply released their unwanted camels into the wild. Nowadays they are an ‘Established Pest of National Significance’. There’s around 300,000 camels in Australia but before culling began in 2009 they were thought to number as high as one million!

Australia’s first camel arrived at Port Adelaide in 1840 and in 1846 South Australian explorer John Ainsworth Horrocks put it to good use exploring the arid interior near Lake Torrens. While Horrocks was preparing to shoot a bird the camel moved and Horrocks suffered fatal gunshot injuries. Horrocks died after requesting the camel be shot.

Camel meat is a growing industry in Australia. Camels are exported live to Saudi Arabia, where the wild, disease free camels are a prized delicacy. There’s even camel dairies producing camel milk and camel rides are a tourism and recreation favorite all over the country.

Camel races like the Alice Springs Cup attract a niche market and camel endurance races in QLD attract competitors from all over the world. The ‘Sheikh Zayed International Camel Endurance Race’ offers $50,000 in prize money and ‘The Boulia Desert Sands’ offers $25,000. (http://camels.islandtrips.org/camels-racing.php)

Camels sometimes inspire deep loyalty from their human companions. Gordon Long (winner of the 1988 Great Australian Camel Race) wanted to retire his camel for her efforts. It took six years for the claim to be settled so Carla could live out her retirement with Gordon.

There’s still plenty of feral camels in the outback and they are still a problem, but some might say they are a resource.